Let’s face it: while money isn’t everything, not having enough of it certainly sucks. I want to show that you can still make a huge altruistic impact without a lot of money, a personal project I’m calling Ethically Bankrupt.

The idea came from suddenly being in a position where I personally didn’t have as much money coming in,but still wanted  to be an effective altruist. While cheerfully using terms like ‘bankrupt’ and ‘skint’ in my blog, I realised I needed to make a vital proviso to this.

I am not poor.

Even by the standards of my developed nation, I am spectacularly lucky to have a job and a wonderful family who helped me out when I stopped studying earlier this year (and suddenly lost a large amount of my income from a student bursary).

We are very lucky

Indeed, what we judge as ‘a lot of money’ or ‘not enough money’ is completely relative. You might feel well off if you’re the first one to have the latest gadget, but hard done by if all your friends have it and you don’t. Similarly, there are presumably millionaires struggling to get a yacht as nice as their neighbour’s and feeling overstretched financially, and subsistence farmers feeling newly wealthy when they are able to furnish their home with a concrete floor. This is critical to our understanding of wealth, poverty and need.

People often talk about poverty when discussing people in developed nations, but this can be misleading.

In the UK, a household in poverty is usually defined as one receiving less than 60% of the median income of the other households in the UK. This means that right now, the poverty threshold in the UK is just under £14,000 per year per household.

Defining poverty across the rest of the world is a trickier proposition. Although our UK definition is in itself arbitrary, it’s harder to make a judgement on what poverty is across nations and societies, and it isn’t just down to money; poverty also depends on factors like how supportive the community you live in is, or how able you are to take part in a full and active life.

However, we can draw this contrast – in the UK, there are measures in place to prevent people from starving, dying of preventable diseases or failing to receive a basic education. Millions of people across the world do not have these measures in place for them.  1.2 billion people live on under $1.25 a day. 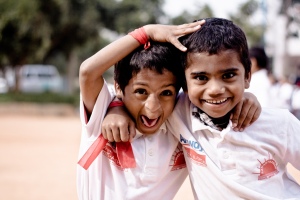 This brings up several conclusions.  One happy conclusion is realising how lucky we are and being grateful in this. Generally speaking, we know there are people who are in need in a way unimaginable to ourselves; hopefully you already realise the vital importance of giving, and crucially, giving what you can.

Even small amounts save lives

Whatever you can commit to giving can and will change and save lives if given consistently, which is why pledging a percentage of your income is such a great idea.

Oxfam’s ‘Even it Up’ campaign highlights the incredible statistic that currently 80 people now own as much wealth as half the world’s population, and the gap between rich and poor is ever increasing. Oxfam are working to tackle this by demanding fair wages for all, more control against tax avoidance by the rich and making sure the poorest people in the world have a voice which is heard by those in power.

We can also be mindful that inequality isn’t just a worldwide issue; the Equality Trust reports that the richest 20% of people in the UK have almost half of the entire wealth, and just like the world as a whole, this gap in wealth is increasing. Professor Peter Townsend defines poverty as when someone’s ‘resources are so seriously below those commanded by the average individual or family that they are, in effect, excluded from ordinary living patterns, customs and activities’; there are a growing number of people in the UK in this situation. Of course we can donate to tackle poverty in the UK – but we are also in the happy position to volunteer our time to local organisations, help ensure our communities are inclusive and raise concerns with our politicians.

Worldwide and locally, we can tackle inequality by understanding its nature and importance in both contexts.  Now there’s something you can give no matter how poor you feel.